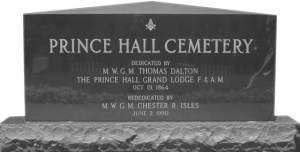 A Abolitionist, civic leader, caterer, leather-dresser, and founder of what would become the Prince Hall Grand Lodge of Massachusetts, little is known of the life of Prince Hall. He is claimed by Grimshaw to have been born in Barbados, B. W. I. on September 12, 1748, although no record of this has ever been found. He is also claimed to have arrived in Boston from Africa in 1765 and sold to one William Hall who freed him in 1770. There were a number of Prince Halls in Boston at this period and the Certificate of Manumission deposited in the Boston Athenaeum Library, dated 9 April I770, cannot be positively identified as referring to Prince Hall.

In 1787, as a property owner and registered voter, he campaigned for the establishment of schools for Negro children in Boston, opened a school in his own home, and successfully petitioned the Massachusetts legislature to protect free Negroes from kidnapping and being sold into slavery. During the Revolutionary War he served in the Continental Army and is believed to have fought at Bunker Hill. In his last published speech, his charge to African Lodge in June 1797, Hall spoke of mob violence against blacks, counselling patience.

Although Grimshaw claims that Hall was a minister in the African Methodist Episcopal Church there is no record of this, while a deposition, which is recorded in the Suffolk County, Massachusetts, Register of Deeds, made by Prince Hall in August 1807, states that he was a leather-dresser by trade; that he was ‘about seventy’; and that in November 1762 he had been received into the full communion of the Congregational Church. The alleged patent appointing Prince Hall as Provincial Grand Master for North America appears to have been another of Grimshaw’s inventions.

Initiated into Lodge No 441 with fourteen others, the lodge granted Prince Hall and his brethren the authority to meet as African Lodge No. 1 (Under Dispensation). Hall petitioned the Premier Grand Lodge of England for a warrant which was granted on September 20, 1784 and delivered in Boston on April 29, 1787. African Lodge No. 459 was organized one week later, May 6, 1787.

Out of this lodge the African Grand Lodge of North America was formed on June 24, 1791 in Boston. The year following Prince Hall’s death, as a memorial to him, and by an act of the General Assembly of the Craft, the name was changed to the Prince Hall Grand Lodge of Massachusetts. The original Charter No. 459 has long since been made secure between heavy plate glass and is kept in a fire-proof vault in a downtown Boston bank.

His obituary in the Boston Gazette for Monday, 7 December 1807 notes his age as 72 which would infer a birth date of about the year 1735. His gravestone mistakenly notes the date of the published notice rather than his actual death the previous Friday.